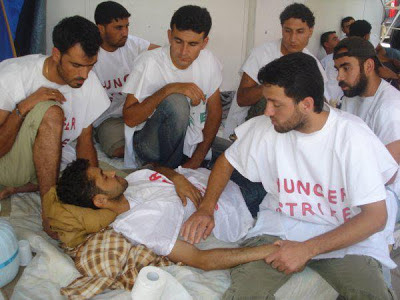 Out: 57th day of the Kurdish Hunger Strike is continuing and Turkish government has not responded yet as the prisoners have declared that they would not revert unles their demans are meet.
On September 12th, 2012 nine women prisoners started a hunger strike in Diyarbekir Prison, their numbers exceeded 700 and Kurdish Political P...

risoners announced that on November 5th, 10,000 more political prisoners joining the hunger strike.
They have 3 demands:
1- Provision of education in Kurdish
2- Provision of defense right in Kurdish
3- The removal of obstacles preventing imprisoned Kurdish leader Abdullah Ocalan from negotiating in peace talks with the Turkish state
In solidarity with the Kurdish Political Prisoners on Hunger Strike please join us to hold a protest and draw attention to the deteriorating health conditions of the hunger strikers in front of the Turkish Embassy in Washington, DC on Friday (November 9, 2012) @12:00 PM
All members of Kurdish community, friends of Kurds and concerned people are encouraged to join to make the voice of these brave young and women in Turkish prisoners for their very basic and reasonable demands to be meet.
. 11/08/2012 01:41:00 AM Posted by rehimreshidi