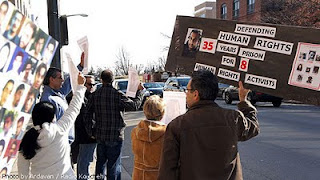 “Rahim Rashidi” Kurdish journalist regarding the necessity of unity of all ethnic groups in Iran says:

I would like to reflect on three specific historical junctures in our society and the history of Iran. In 1966, after the Constitutional movement in Iran, it was the Kurdish people who fought for the Constitutional movement around Qazvin led by “Yar Mohammad Khan Kermanshahi”. And after they supported and welcomed ”Mossadegh” and his party. We know that in ’79 revolution, the Kurdish people have played an important role. Unfortunately, the propaganda of the Islamic Republic caused doubts about it and made the Iranians look at their Kurdish fellow prisoners skeptically, people who actually belongs to Iran.

My Messages is that we need to remove the doubt and put it aside. Because without the participation of ethnic groups who have been oppressed so far in Iran, Iran can not be unified and without a fair share of power and wealth we cannot achieve democracy. When you look at Western countries (America and Europe), they have money and wealth, we have less wealth but higher values and that is being an Arian nation. I asked myself why as long as I am considered Iranian, and while I am proud of being Iranian I am marginalized? We can become a noble nation just like Bahrain and Azerbaijan. If we are looking for democracy, human rights and justice, we need to share power and wealth and no citizen should be left behind. With a belief like this we can, with no exceptions, bring down any dictatorship and found a democratic society.