All Political Prisoners in Iran 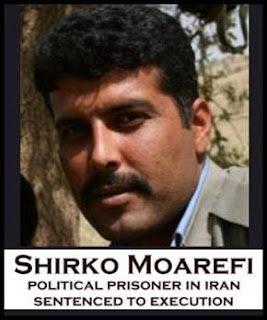 1:05 – Harish Rahimi, Campaign for the Defense of
Political Prisoners in Iran

NOT ONE MORE EXECUTION!

There will be an open microphone at this action; Farsi speakers will be provided with English translation. There will be no restriction on flags or signage for participants that are in support of this action. We particularly encourage signs that reflect the demands for 1) immediate and unconditional release of Shirko Moarefi, other political prisoners under execution sentence, and all political prisoners in Iran, and 2) that demand an immediate halt to executions in Iran.

After the DuPont Circle action, participants are invited to join a follow-on action outside the Iraqi Embassy to demand an end to the Iraqi government’s repression, deportation, and violence against Iranian refugees in Iraq.
. 4/15/2011 03:53:00 PM Posted by rehimreshidi