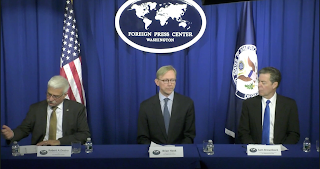 QUESTION: Thank you very much. I am Rahim Rashidi, or Mr. Kurd, from Kurdistan TV. As you know, in last demonstration in Iran, the majority – strong majority of demonstrators, we heard saying no Islamic – no Islamic Republic of Iran. That’s mean that strong majority of Iranian people looking for regime change in Iran. And same time, you don’t have any plan for regime change. Any comments about that and how you can help Iranian people?
MR HOOK: Well, we have helped the Iranian people by giving voice to their demands for a more representative government, and that is a reversal of the prior administration’s policy, which gave voice to the regime’s policies and views. We’ve stood with the Iranian people. We’ve sanctioned their oppressors. We support their demands for a more representative government. And many of the things that we’re asking the regime to stop doing are the same things that the Iranian people are asking them to stop doing. They are tired of their national wealth squandered in Lebanon, Iraq, Syria, Bahrain, Yemen, and terrorism across five continents over the last 40 years. They would like to have a government that is more responsive to the people instead of the proxies. And these are all legitimate demands.
I think the Iranian people have been, over many, many decades – even over the last century – working toward a government that truly represents them. And these last 40 years will not be remembered as a government that represents the people. And so – but – and all of that said, the future of Iran will be decided by Iranians. It will be decided by the people. It will not be decided by the United States Government.
We have put in place the strongest economic pressure in this government’s history, and we have also stood with the people in ways that are very innovative, very creative, and very consistent. And we will continue to do that.
ASSISTANT SECRETARY DESTRO: I think when you look at what the Secretary had to say today, he was responding basically to your question. And the Iranian Government themselves will say do you want to change the regime, or do you want to change our behavior? The Secretary was very clear this morning: He wants them to change their behavior, because it’s not the role of the American Government to change the Iranian Government. I mean, it’s – if we really believe in democracy, the Iranians have to shoulder that burden themselves, but it’s going to be very, very hard to do that the more repressive the regime becomes.
#MrKurd
. 12/27/2019 01:21:00 AM Posted by rehimreshidi