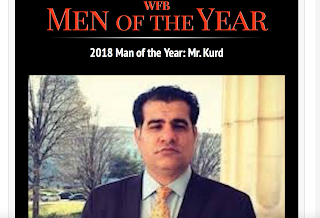 The first reference to the Kurdish people appears on a tablet that has been dated to the third millennium before the common era. In those days of stone and wind and blood there dwelt in the land of Karda, fast by Lake Van, a great tribe. They have dwelt in the harsh beauty of the desert ever since, as empires rose and fell, prophets, visionaries dreamed, and a new, somewhat drearier world of machines emerged.
In the 21st century, after decades of persecution at the hands of a genocidal dictator, a great warrior appeared who would deliver this noble and warlike race from their ancestral captivity and lead them to freedom. His name, as Churchill once wrote of T.E. Lawrence, "will live in the annals of war." But this is not a tribute to Richard Cheney, whose considerable valor has of late been chronicled elsewhere.
In 2018 another chieftain would rise to the defense of the Kurdish people. During a press conference in September, President Trump ignored the relentless bleating of various hacks from CNN in order to honor his commitment to viewpoint diversity in media by calling upon Rahim Rashidi of Kurdistan TV. Quoth the commander-in-chief: "Mr. Kurd?"
To liberal ninnies this distinguished sobriquet was, at the very least, politically incorrect, if not a slur:

Replying to @ddale8
Trump says it'd be a "better deal" to put tariffs on Canadian cars rather than make a trade deal with Canada.

6,833 people are talking about this

I'm still stuck on the President of the United States calling a Kurdish journalist asking him a question at the press conference "Mr. Kurd"
— Dianne Gallagher (@DianneG) September 26, 2018

Well I prefer not to be so pessimistic about it yet but he does have a point---> Donald Trump's worldview was laid bare at the UN -- and it should worry anyone who understands history @CNN https://cnn.it/2Q8oaXG

Donald Trump's worldview was laid bare at the UN -- and it should worry anyone who understands...

US President Donald Trump came late to the podium at the United Nations General Assembly on Tuesday morning. And within moments, he had the gathered world leaders laughing.
cnn.com

I would have answered, 'Thank you Mr. Russian'

's other Tweets
To Rashidi it was nothing of the kind:

His name is Rahim Rashidi, he works for Kurdistan TV, and he is thrilled.

“I love it!” he said of Trump. “He made me happy by this sentence.”

1,610 people are talking about this
"Kurds have experienced assimilation and genocide, simply for being Kurdish," Rashidi explained later. "To be addressed as ‘Mr. Kurd' means a lot to me. To recognize my identity when it has always been denied is a great deal for me. Especially by the president." Unlike simpering would-be experts at the Washington Post, President Trump understands that the historic denial of the Kurdish people's rights is one of the great crimes of the modern era. This is why, when another journalist who was present announced that he, too, was Kurdish, the president responded, "Good. Good. Great people! Great fighters. I like them a lot."


For exhibiting the proud masculine virtues of his ancient people and helpfully illustrating the historical and geographical illiteracy of the White House press corps, Rashidi has been named a 2018 Washington Free Beacon Man of the Year