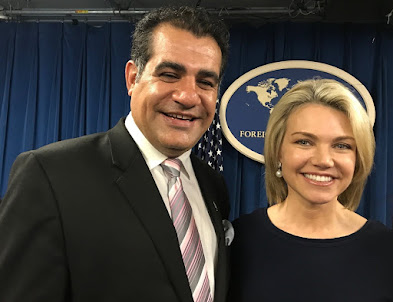 Rahim Rashidi is a Kurdish journalist reporting in the United States for Kurdistan 24. He also serves as a board member of the Club of the Association of Foreign Press Correspondents. Rashidi also works as a freelance reporter for Kurdistan T.V. and was named Man of the Year by the Washington Free Beacon. Rashidi spoke to us on American misconceptions about Kurdistan, his hopes for the new administration, and his feelings on the “Mr. Kurd” incident. Rashidi expresses his thoughts on the former administration's decision to pull  American forces out of Kurdistan and the importance of Kurdish unity. He also described the challenges Kurdish journalists face when it comes to necessary resources to cover the stories they want to. Rashidi highlights the importance of foreign correspondents having knowledge of the U.S. and how his job as a foreign journalist is to speak to and for other stateless Kurds.

What brought you to the United States? How long have you worked here?
Since I’ve always been a refugee as a Kurd, I travel a lot. My people are one of the largest stateless nations on the planet. In other words, we are even refugees in our own homeland. Kurdistan has been partitioned and annexed to four neighboring countries: Iraq, Syria, Turkey, and Iran. After leaving my hometown, I first moved to KRG, then sought refuge in Turkey, Sweden, France, and then the United States. I arrived here in 2010 and started my work as a journalist in 2012. Part of what brought me to the U.S. was the freedom of press and expression and I also realized the importance of being in this influential country as a Kurdish journalist because there are, quite frankly, not many of us here in Washington D.C.
What has your experience in the U.S. as a foreign correspondent been like so far?
America is a unique and different country in many ways. It is vast, rich with various kinds of resources, multicultural, modern and a liberal democracy where people of different ethnicities and ideologies have resources and constitutional rights to agree or disagree on various policies of the local and federal states peacefully. There is much to report on as a foreign correspondent. Washington is the political capital of the world, and as such its policies have great consequences for all other nations. That’s why we notice all eyes are on Washington, and thus it has given me much experience.
What work are you most proud of?
I am most proud of my job and I love it. It allows me to build bridges between two nations via conveying messages about ways of life, cultural differences, humanitarian ties, and policies. I often think that I have a duty to convey the messages of 50 million stateless Kurds to the free world. Kurdistani people are quite unique. Although most are Kurds and Muslim, there are large communities of Christians, Yezidis, Bahais, Jewish, etc. They live together in peace and harmony in a part of the world which is known for turmoil and conflict. I often highlight this coexistence to officials and to the American public here as well, while also supporting the U.S. government and the American people and conveying their messages to the Kurdistani people via the media channels that I work for.
How did you feel about former President Donald Trump addressing you as “Mr. Kurd”? Why did you choose to embrace the moniker? 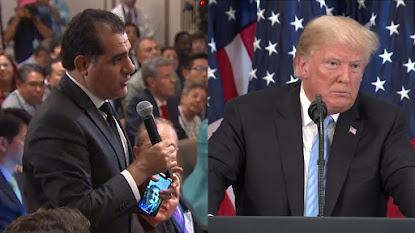 We Kurds have always been denied a different nation and ethnicity of our own due to the countries that partitioned Kurdistan: if you are a “Kurd” you are labeled as a mountain Turk, or separatist (in Persian “tajzia talabi” or in Arabic “infisali”), which is why our people shout at the top of their lungs: we are Kurds. Until now Kurds have not officially been recognized as a distinct nation in Turkey, Iran, and Syria. Only recently has the Iraqi constitution recognized the existence of a Kurdish people. As such, being called Mr. Kurd, by the head of the most powerful state in the world is something that I will always be proud of. This is a message to those countries in the Middle East that there is a nation of people called the Kurds and that the U.S. somewhat recognizes us as a nation who are different from Arabs, Turks, and Persians. In like manner, in December, 30th 2018 I was named by the Washington Free Beacon as the Man of the Year and I tried my best to use it for the good because of my people: https://freebeacon.com/men.../2018-man-of-the-year-mr-kurd/
What has it been like to report on U.S.-Kurdistan relations in the past year?
It really was a year full of ups and downs. The previous administration decided to pull out some of the U.S. forces from the western part of Kurdistan, thereby abandoning the Kurds. This shocked the Kurds as they did not expect this from an ally. This was devastating news for many Kurds who were loyal and shed blood in the fight against ISIS. They thought they were true partners of The West, in particular the U.S., in the costly and bloody war against ISIS but this abandonment stunned them greatly. It was hard to report on that particular event.
Ambassador David Brownstein has said recently that the U.S. is ready to help facilitate renewed negotiations between Syrian-Kurdish parties. How do you feel about American intervention in Syria?
Certainly, all superpowers and regional powers have been participating in Syrian affairs. War-torn Syria no longer has any real sovereignty. Kurdish people have fought ISIS and have contributed to its defeat. The U.S. is doing great if it helps facilitate renewed negotiations between Syrian Kurdish parties. The unity among Kurds is particularly important for Kurdish people. Together, The Kurds and the U.S. can cooperate and prevent the re-emergence of terrorism and extremism, which is in the national interests of the U.S. as well as the Kurds.
I hope the new U.S. administration led by President Biden can help unify Kurds in Rojava. This will contribute to coexistence and democracy in Syria and perhaps even the region. Kurdistan and America have a friendship that goes back to 1991. Relations have been largely friendly but trust has sometimes weakened when the U.S. abandoned its Kurdish allies. What is important is that the friendship and partnership have endured. It would be wise if President Biden could build on that, consolidate this partnership and take it to another level further.
What has been the most challenging aspect of being a Kurdish reporter in the U.S.?
It’s good that we have access to information, officials, and offices, and thanks to the freedom of speech in the United States one can question and ask about the topics they are interested in, and so we have really made many great reports thanks to this access to information.
The most challenging part for a Kurdish reporter, and for me personally, is that we don’t have the necessary resources to cover everything or to talk about every event that we would love to cover. There is so much to report on, so much news and so many books, regarding Kurdistan which we want to cover. But of course, this is a concern of all Kurdish overseas.
In your opinion, what do Americans not know about your country/region?
Americans unfortunately are not well-informed and aware of the Kurdish people, their sufferings, and their struggle for freedom. They are not aware that Kurdistan is the only place for coexistence of all religious and ethnic groups in harmony, and that the Kurdistan regional government (KRG), with a population of 5 million, embraces about 2 million refugees and IDPs who fled ISIS. Kurdistan is performing better than neighboring countries in providing freedom of speech and other liberties that Americans enjoy.
Americans don't know that despite our great suffering at the hands of our oppressors such as Saddam Hussein, we are a joyful and optimistic people. We have an entrepreneurial spirit, we are hospitable and we are loyal to our friends. I believe Kurds and Americans have a lot in common. We have shared values, but most Americans don't know that and part of my job is to inform Americans about these commonalities.
What is your advice to other foreign correspondents working in the U.S.?
Foreign correspondents have many things to worry about but these should not stop us from doing our job to the best of our abilities. The vastness of the country means that you can’t be everywhere at the same time. Also, there are some security restrictions, in addition to COVID-19 safety regulations. Educating oneself about the use of decision-making processes, U.S. culture, and geography, are things that foreign correspondents should study and pay attention to greatly. Other challenges have to do with learning the language effectively to avoid misunderstanding.
What is the importance of the Association of Foreign Press Correspondents to you?
Its importance consists of things such as bringing together reporters who work on U.S. foreign policy, introducing them to each other, sharing ideas and lessons learned, brainstorming the current obstacles, and finding common solutions. The organization is often a window of opportunity for foreign correspondents in regards to learning about U.S. foreign policy.
. 5/05/2021 02:33:00 PM Posted by rehimreshidi