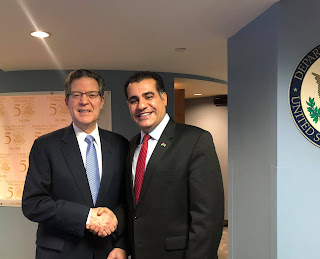 AMBASSADOR BROWNBACK: Between Iran and the Kurdish region?

AMBASSADOR BROWNBACK: Oh my gosh. Night and day different. Well, I mean if that’s the – Iran is a country of particular concern for us. It is one of the worst violators of religious freedom, and one of the most persecuting environments in the world for religious minorities. If you’re not in the dominant religion, you’re persecuted, and in sometimes in deadly ways. Kurdish region in northern Iraq, which – that’s the – of each region I’m going to speak about that I’ve been to – has been a protecting area of religious minorities and a – no place is perfect, but they have been a refuge for religious minorities for a number of communities, and I’m delighted that they’ve been that. I visited the region last July, and was there and talked with the leadership and a number of the minority communities.

And they – the Kurdish region there has been a refuge. Which by the way, this administration has done a great deal of work to rebuild the minority – religious minority communities in northern Iraq, particularly the Yezidi and Christian communities that were decimated by the ISIS rule in that area. A number of their homes and their religious institutions have been rebuilt. The Vice President has led this effort. It’s been an effort from his heart – the AID, Mark Green, the administrator, and I were both on this trip in July, and there’s private resources as well coming from other places.
I just met with the – some of the Hungarian officials today. They’re helping to fund the rebuilding of both Christian and Yezidi homes, and it’s a new model because in the past, so many times whenever a minority community, religious minority community was persecuted in the Middle East, we just kind of said all right, everybody will emigrate somewhere. They’ll go to Europe, United States, South America, Australia, but they’ll go somewhere else. And so you see all the minority communities declining rapidly in the Middle East.

This time we’re saying, let’s rebuild these areas and let’s have people be able to go home to where they were run out of, and see if really the populations can move back. One of the Catholic bishops I saw a month or so ago, and said about 60 percent of their parishioners had moved back into the Nineveh plains in certain areas, which is great news, that people are moving home. They still have safety and security issues, but that really is what we should aim at I think in a lot of these areas, is for the minority faith communities to be able to go home safely, and be able to live in safety and security.
#MrKurd
#Rahimrashidi